Boyfriend Dungeon is getting an update, but not to its gameplay. In response to players’ concerns that the current content warning doesn’t go far enough, Kitfox Games tweeted on Saturday that it would update the message next week. The developer says that right now the warning, “inadequately describes the events of stalking and emotional manipulation that exist in the story.”

The content warning for Boyfriend Dungeon inadequately describes the events of stalking and emotional manipulation that exist in the story. We’ll update the game next week with a more accurate CW. We apologize for any hurt inflicted by our mistake. Thank you for playing!

Boyfriend Dungeon is a dating sim / dungeon crawler in which players can build a relationship or romance with a number of sharp, dressed swords. Days after the game’s surprise release last Wednesday, people started voicing concerns on social media about a plot element that involves one of the characters stalking and emotionally manipulating the player. People took issue that the content warning that pops up when loading a new game doesn’t adequately address the potentially triggering elements players might be subjected to. They were also concerned that some of the plot’s darker themes weren’t communicated well enough in the game’s advertising and Kickstarter campaign. Right now, the content warning reads like this: 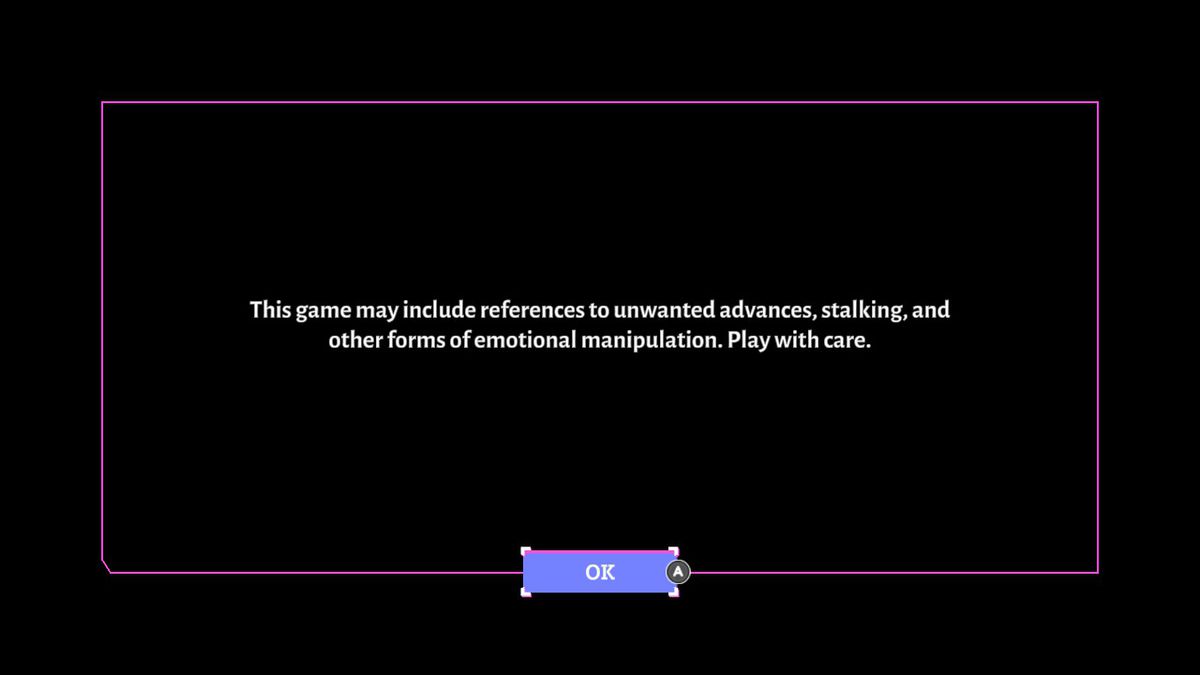 It is not unusual for developers to update or implement content warnings in response to evolving attitudes about player protections and consent. Earlier this year, Team Salvato released Doki Doki Literature Club Plus! — an expanded version of the deceptively unsettling Doki Doki Literature Club — which included enhanced content warnings that were not present in the original release. The updated content warnings allowed players to choose how much they wanted to be spoiled about the plot in order to make an informed decision on whether to play. The game also included a setting that would warn the player in-game whenever they were about to experience potentially upsetting content.

After Kitfox Games’ announcement, some players were still concerned and expressed a desire for the developer to implement a feature that will let players opt out of the problematic content altogether. Boyfriend Dungeon already has a feature like this in which players can choose to not receive texts from the player’s mom. However, opting out of text messages is different from opting out of portions of the story since the text messages are not critical to the plot.