ToneStone is an app designed to make producing music easy, even for users without any musical experience, and it’s created by people who worked on Guitar Hero and Left 4 Dead. Even though the app is officially being announced today, it’s still in closed beta, and there’s a waitlist for those who want to try it out. As a music production hobbyist, ToneStone’s interface and game-like features very much seem like my kind of jam, based on videos I’ve seen of the app and my conversation with founder Greg LoPiccolo.

If you’ve never heard of LoPiccolo, you’ve probably heard of games he helped make. He worked at Harmonix, the studio that made music-based games like Rock Band and Guitar Hero. Another ToneStone founder is Tom Leonard, who has some of Valve’s greatest hits, like Left 4 Dead and Half-Life 2, listed on his LinkedIn. LoPiccolo said that the mission for ToneStone is to “empower a global community to create and share music,” which he sees making songs as a “critical human need that everybody wants.”

ToneStone uses a system of loops and decks

In an attempt to make music production novice-friendly, ToneStone uses a system of loops and decks. Imagine loops as building blocks to a song — they can be used to add drums, synths, strings, etc. The loops are then organized into decks, which represent different music genres like synthwave, trap, or pop. ToneStone has premade decks built in, but you can also create your own, and even add your own sounds or recordings as loops.

This tutorial video illustrates what the process of actually making music is like in the app.

The team behind ToneStone also hopes it’ll act as a sort of music creation social platform, by making it easy to share your music and remix songs that others have made (at the moment, most of the sharing is being done on Discord). There have been other games that let users make music, but it’s difficult to navigate the line between being too complex for beginners and too simple.

Remixing another ToneStone user’s song (which are currently shared in the Discord) gives you access to the entire project file, or as LoPiccolo put it, the musical DNA, which lets you really change things up from the original. You can also share any songs you made by exporting them as an MP3 file and uploading them to services like SoundCloud.

With founders who have years of experience in making games, it’s not surprising that ToneStone has gamified elements. LoPiccolo told me that the tutorials, which are meant to teach the basics of both the software and music composition, are lightly gamified. He also talked about the similarities between building a deck of loops and building a card deck in games like Hearthstone or Magic: The Gathering — there are built-in decks, too, but the real fun comes when you start making your own.

ToneStone takes inspiration from games like ‘Magic: The Gathering’ and ‘Hearthstone’

LoPiccolo told me that the team has “some, I would dare say, revolutionary ideas” that are currently in development, that would “let people make musical decisions, and write and perform music as gameplay.” While what the actual gameplay will look like is unclear, the idea is to give the player enough decisions to get them into a groove, sort of like what can happen when playing more traditional games like Call of Duty. The difference would be that, at the end, you’d have a musical creation.

I came away from the discussion imagining a series of quick-time events where you were deciding where the song was going to go, which sounds like a really fun thing to play around with (though it’s unclear if there’s some sort of seed or another process that prevents everyone from ending up with similar-sounding songs). LoPiccolo said that the ultimate goal was to make the experience either single or multiplayer, giving you the ability to collaborate with someone else to make music.

ToneStone’s modability reminds me of the DIY music production world

Like video games, LoPiccolo says that ToneStone will also be moddable and extendable. Its engine is written in JavaScript, and he says that users will be able to contribute not just music but interactive content like tutorials, guides, or even game modes. As someone who’s spent some time in the DIY music production world, the idea of those kinds of community contributions reminds me of the YouTube tutorials, shared project files, and VST plug-ins. 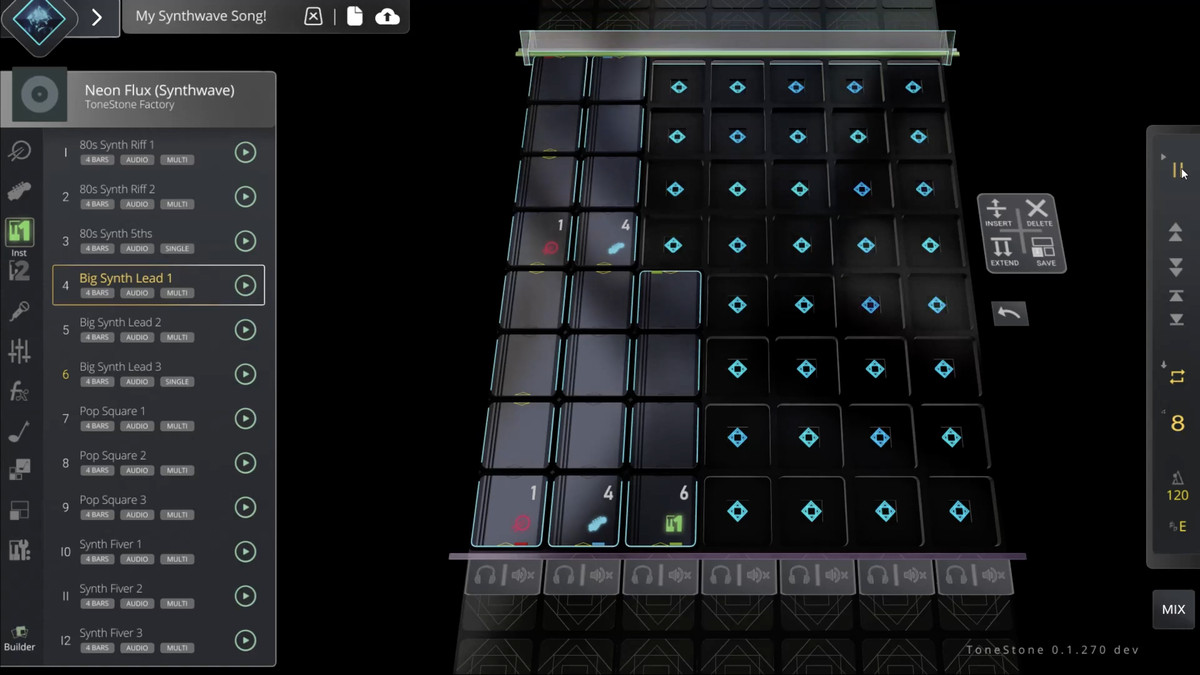 Compare this image of ToneStone’s UI from one of its tutorial videos to FL Studio’s UI, seen below.Image: ToneStone

A project file for a relatively simple song in FL Studio.

While ToneStone seems to have a good number of advanced features, simplicity is still a priority for its creators. They say users should be able to go from opening the app to making music “within seconds” — the more advanced stuff can wait if you’re not interested or ready to learn it.

I’ve spent hours and hours learning how to make music in apps like FL Studio and Logic Pro (mostly for fun), and hearing LoPiccolo enthuse about ToneStone makes me wish I had something like it years ago. I suspect I may end up using it for quick sketches and soundtracks that I would’ve used Logic for, just for the speed and ease of use.

Of course, ToneStone isn’t the first app designed to let music novices create songs. Apple’s GarageBand has a feature called Live Loops, which has a similarly user-friendly interface on iPads. I remember my experience using Live Loops as being fun but extremely frustrating when I tried to really make the song my own. GarageBand is also limited to Macs, iPads, and iPhones, where ToneStone runs on Macs and PCs and is distributed through Steam.

ToneStone’s goal is to blend the social aspects of gaming with the creator-driven content of platforms like Instagram to ultimately create music. While the social aspects of music production that ToneStone is leaning on aren’t new (especially in the indie and hobbyist music scene), it does have a point that actually making music can be daunting to beginners. When I first started, beginner tutorials looked like this, which is significantly scarier than ToneStone’s own tutorial.

ToneStone is still in its early stages, but its team has high hopes for it. LoPiccolo painted a picture of what the app can currently do, saying that it can be used to “create license-free soundtracks for indie games or live streams,” and said that the team is working on making things like live performances and collaboration possible. With the app still in closed beta, there’s not a set-in-stone business model yet, but LoPiccolo told me that the intent is to offer a base app for free, with access to advanced features unlocked by a subscription (though he didn’t share pricing information). He also said that the app will include a marketplace where you can buy new loops, effects, or modules.

You can sign up to the beta waitlist on ToneStone’s site.