PowerA’s $99.99 Fusion Pro for the Nintendo Switch is made for gamers who want a more customizable controller. It’s more similar to Microsoft’s Xbox Elite than Nintendo’s Switch Pro gamepad, with a handful of components you can physically swap out to better fit your preferences. For instance, if you don’t like the way that the Fusion Pro’s analog sticks feel out of the box, you’re welcome to swap them. There are two extra sticks in the zip-up case that it ships in. In addition to the two standard sticks, there’s a much taller concave stick, as well as a tall smooth convex stick that feels more like something you might find on an arcade stick.

The customization doesn’t stop there. The Fusion Pro supports swappable face plates, too. The default white plate is matte textured and feels similar to many other controllers, but the black plate has a grippier texture that blends in more seamlessly with the Fusion Pro’s rubber-coated grips. The Fusion Pro is a little bigger than the Nintendo Switch Pro, but it doesn’t stray too far in ergonomics and layout. It connects wirelessly and is just as reliable as the Nintendo-made controller when it comes to long battery life, like PowerA’s smaller Nano Enhanced controller that I reviewed last year. PowerA claims up to 20 hours per charge, and it has no trouble meeting that metric. This controller includes a 9.8-foot USB-A to USB-C cable to recharge or to play in wired USB mode (a switch on the back of the Fusion Pro toggles between wireless and wired modes). 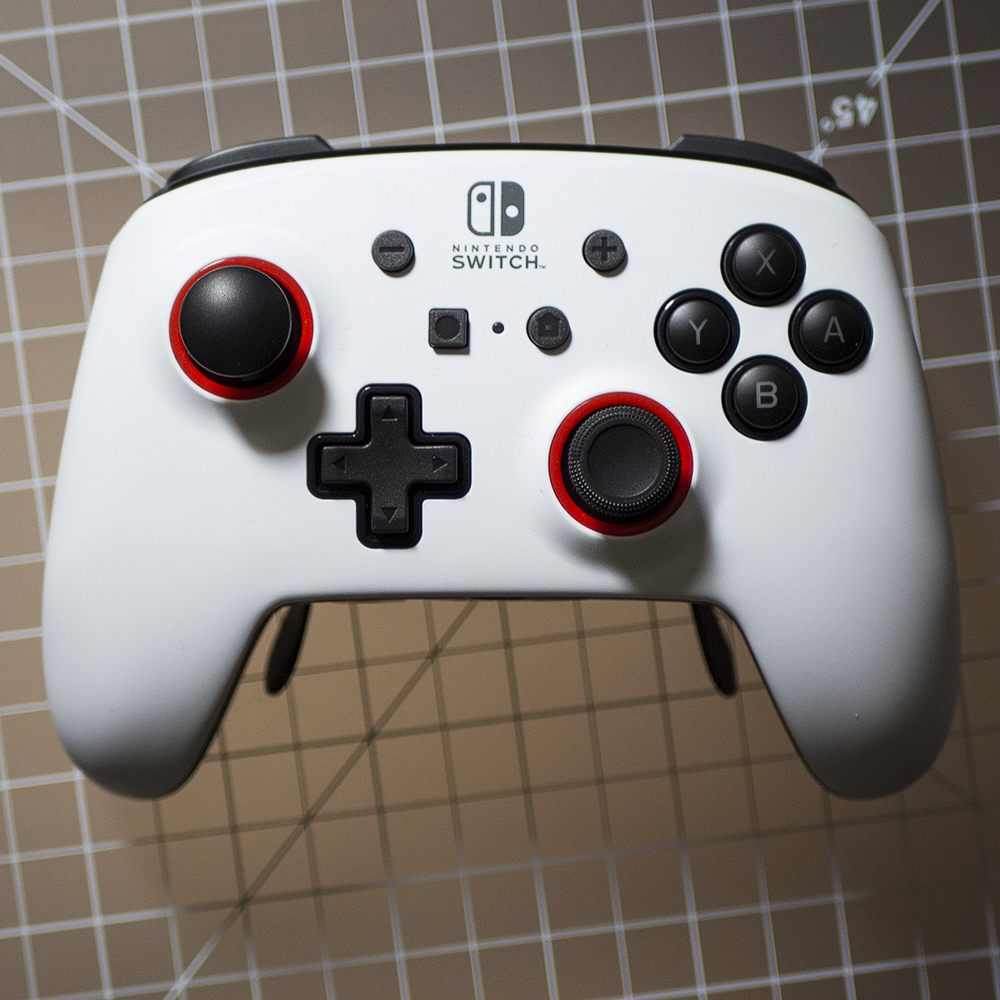 The real highlight of the Fusion Pro is on its back, where up to four mappable paddles can be installed onto a removable module called the “Pro Pack” that snaps on. You can map up to four controller functions (aside from analog movement) to the paddles, making the Fusion Pro more customizable — and accessible — than other controllers made for the Switch. The module is optional, though. If you don’t want it on the controller, it pops off easily.

Mapping the paddles to one of the Fusion Pro’s buttons is simple, requiring a few button presses.

The Fusion Pro’s rear paddles came in handy in games that have complicated control schemes like Monster Hunter: Rise. Even in games with simpler schemes, it can sometimes just be nice to not have to reach for a button or two, and instead rely on the paddles. I enjoyed drifting around corners in Mario Kart 8 Deluxe with a paddle instead of reaching up for a shoulder button.

Assigning functions to the paddles is simple. There’s a button on the controller’s rear that’s dedicated to programming each paddle, and the process involves holding it for three seconds until an LED lights up on the controller’s front side. Then you tap the button you’d like to have remapped, then press the paddle to which you’d like it to be assigned. In addition to being great for simplifying a controller layout, the paddles could be a boon to some people from an accessibility standpoint.

The level of customization is tough to beat for a Switch wireless controller. You’ll only get audio through the Fusion Pro’s 3.5mm audio jack if you’re in USB mode.

You can gain a lot of utility by using the Fusion Pro, but it doesn’t come particularly cheap. At $100, it’s $30 more than Nintendo’s own Switch Pro controller. It’ll be worth purchasing for people who really want a few extra levels of customization, especially since it’s not a huge price boost over Nintendo’s Switch Pro controller. But it’s missing some crucial features that some people may not be ready to cut out — and ones that Nintendo’s Pro controller has up on it.

The Fusion Pro lacks vibration, and it doesn’t feature an NFC chip to read Amiibo cards and figures in games that support that functionality. Those omissions are common among third-party controllers, but it’d all be nice to have in a controller at this price. I initially was excited to discover that the Fusion Pro has a 3.5mm audio jack, but that faded once I realized that it can only be used when it’s wired to the Switch dock with its included cable. It would have also been nice if the directional pad could be swapped out for a different one, which is something that Microsoft’s Xbox Elite controller allows.

The Fusion Pro isn’t a perfect all-in-one replacement for the Switch Pro controller, and I wouldn’t suggest that most people purchase it if their needs are already met. Though, despite its flaws, the deep level of customization that it offers makes it compelling enough if you want or need custom controls on the Switch.