From the outside, the Razer Blade 14 looks like every other Razer Blade laptop that we’ve seen in the past few years. It’s got the all-aluminum chassis, the RGB keyboard, the three-headed snake logo, and the subtle black vibe.

But this Razer Blade is very different. It’s the first Blade ever to be powered by an AMD processor. That chip — the Ryzen 9 5900HX — has enabled Razer to put out the most powerful 14-inch gaming laptop ever made.

That’s not just due to the CPU’s raw power. The efficiency of AMD’s product has given Razer the headroom to include Nvidia’s top-of-the-line RTX 3070 and RTX 3080 mobile graphics cards. This is the first 14-inch laptop with those chips. Asus’ Zephyrus G14, which has topped all kinds of best gaming laptop lists for the past year, maxes out at an RTX 3060. 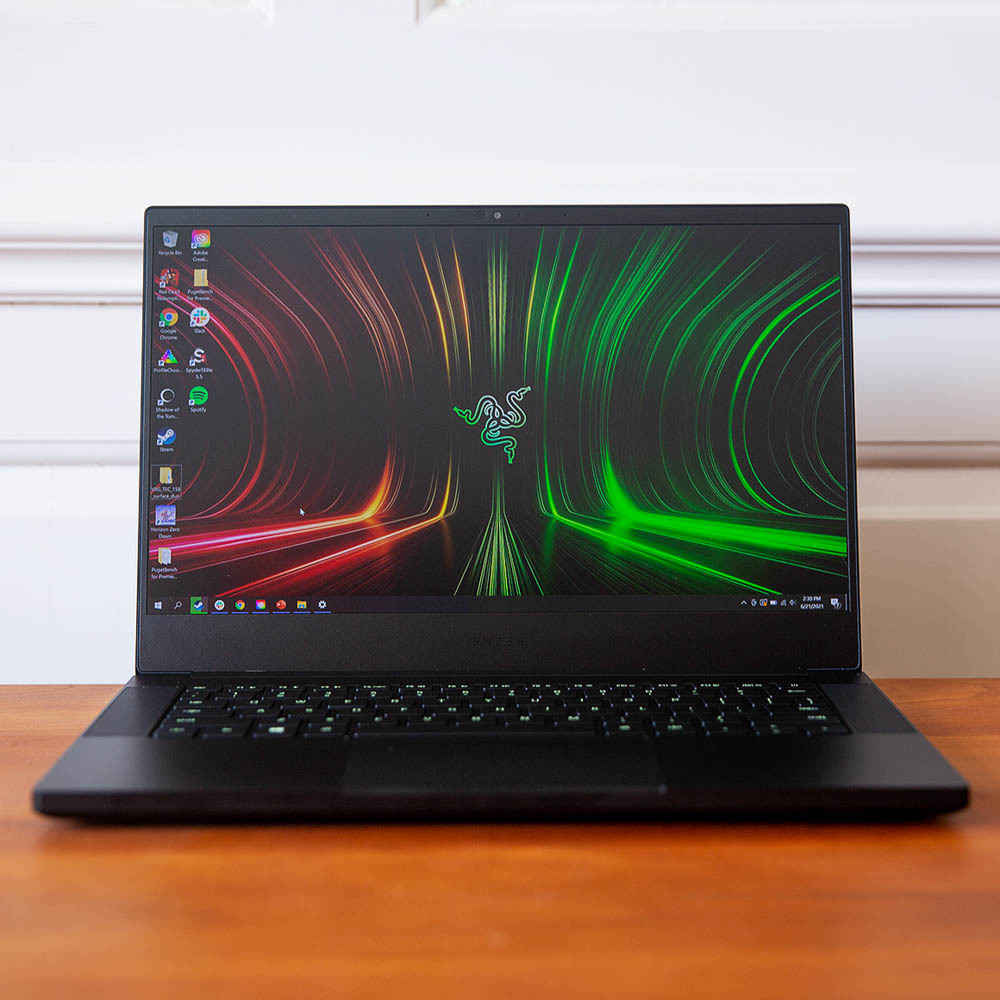 Of course, whether this laptop is a remarkable achievement for Razer is a different question from whether you should actually buy it. The Blade 14 isn’t a cheap system — our test unit costs $2,199.99 — and many folks may justifiably want a bigger screen for that price. But if portability is your priority, this laptop should be on your list. It’s got a mix of performance, specs, and build quality that you won’t find anywhere else.

But the Blade 14 is still expensive as ultraportable gaming laptops go — you’re paying a $500 premium over the FHD 120Hz Razer Blade Stealth 13 (which has a much weaker GTX 1650 Ti Max-Q GPU and a lower refresh rate screen) and $200 more than the top Zephyrus G14 (which has an RTX 3060, but also 32GB of RAM and a fancy dot matrix on its lid).

Blade laptops no longer have the tiny arrow keys that made everyone mad for a while.

It seems like Razer has priced this RTX 3070 unit correctly, because the performance I saw was very, very comparable to what we saw from the Blade 15 Base with an RTX 3070. That means it’s blowing smaller laptops, like the Stealth 13 and the Zephyrus G14, out of the water.

These numbers make a fairly compelling case for buying the AMD-powered Blade 14 over the Intel-powered Blade 15 Base. The Blade 14 gives you almost identical gaming performance but double the storage at no extra cost. It’s also significantly thinner and lighter, and its eight-core processor will give you an advantage over the Blade 15’s six-core processor in heavy multicore tasks. You’ll want the Blade 15 if you need a bigger screen, of course, but I don’t see many other arguments in its favor at this point.

Just for comparison’s sake, the Blade Stealth 13 only averaged 45fps on Shadow of the Tomb Raider with ray tracing off, which is a very noticeable difference. The Zephyrus G14 with an RTX 2060 put up 74fps on Tomb Raider sans ray tracing, and 31fps on Red Dead. Note that both of these laptops were running the games in FHD, so that performance gap is bigger than the numbers make it seem.

Where the Blade 14 did fall behind was in our export test. It took seven minutes and six seconds to export a five-minute, 33-second 4K video in Adobe Premiere Pro. That’s slower than the Blade 15 Base took, and over a minute slower than the Stealth 13. AMD systems tend to lag behind Intel ones on this task — Intel’s Quick Sync feature is likely a factor. But the Blade 14 did handily beat its two siblings on the PugetBench for Premiere Pro benchmark, which measures performance on a variety of Premiere Pro tasks.

You can integrate your RGB scheme with your room’s lighting if you have Phillips Hue products.

Battery life was acceptable, but not as tremendous as we’ve seen from some recent AMD systems. I averaged six hours and 12 minutes of continuous work with the screen around 200 nits of brightness. That’s not terrible — it’s still not uncommon to see gaming laptops die after just a few hours on battery — but a number of AMD rigs are also breaking the eight-hour mark these days.

Finally, the Blade 14 includes Razer’s new “next-gen” vapor chamber cooling, which includes dual 88-blade fans with blades that are just 0.1mm thick. Unfortunately, the system struggled to keep up with its chips. I often saw the 5900HX jump into the high 90s (Celsius) during gaming and other intense loads. It was consistently hanging out in the high 80s at other times during testing. The good news is that none of that heat ended up where I could feel it: the bottom of the chassis, keyboard, and palm rests never got uncomfortably toasty.

The whole chassis is CNC aluminum

In case you’ve never used a Razer laptop before, their signature feature (apart from the gaming performance) is the RGB keyboard. The Blade 14 has per-key RGB lighting that you can customize in the Razer Synapse software that comes pre-installed. While many colorful gaming keyboards look obnoxious and garish, Blade keyboards are subtle and chic, in part because there’s almost no backlight bleed from beneath the keys and the fonts are simple, not aggressive. I’d have no problem bringing this Blade to an office or coffee shop — the color is a flourish, rather than a distraction. The touchpad is also quite good, with a smooth texture and no palm rejection issues that I saw.

The whole chassis is CNC aluminum, and it’s quite sturdy, though also a fingerprint magnet. There’s a respectable port selection, which will allow you to power up to three external displays at a time. You get one HDMI 2.1, in addition to two USB-C ports with DisplayPort 1.4, two USB-A ports, an audio jack, a lock slot, and a charging port. This is the =same port selection you’ll find on the Zephyrus G14. No Thunderbolt support, since that’s an Intel feature, but you do get Wi-Fi 6E (Gig+) and Bluetooth 5.2.

Games also look great on the QHD display, which allowed me to take full advantage of the frame rates produced here. The screen maxed out at 310 nits in our testing, and it covered 100 percent of the sRGB color gamut. It’s got a matte texture, so I never had any issues with glare in bright settings. It is a 16:9 panel, which is a common aspect ratio to see on gaming laptops, but it does leave less vertical space for work and productivity than a 16:10 or 3:2 display. I’ve been happy to see a number of gaming flagships (such as Asus’ new Zephyrus M16) move over to 16:10 this past year — it makes for gaming laptops that are just a bit more versatile for everyday use as well. I’d hoped Razer might follow suit with this year’s Blades, but it looks like I’ll be waiting longer.

I only have one real complaint with the Blade 14’s chassis features, and that’s the webcam. I’m happy that it does have a webcam — that’s not a given on gaming laptops these days. And it supports Windows Hello facial recognition, which is handy. Unfortunately, the camera is so bad that having it is almost (almost) as bad as not having one at all. It’s quite grainy, and I looked dark even in bright settings. If I were using the Blade as my primary driver, I would probably buy an external camera for my Zoom calls.

If you’re looking for the most power-per-pound you can get, the Razer Blade 14 is the ideal gaming laptop for you. Fourteen inches won’t be enough screen for everyone, of course, especially at this price point — and plenty of shoppers may be willing to give up the fancy RGB and a few frames per second in favor of the unbelievable battery life the Zephyrus G14 and G15 offer. There are a few knocks against the Blade — namely the poor webcam, the chassis’s fingerprint retention, and the steep price tag — but if none of those are dealbreakers for you, I see no reason not to recommend it. There’s really nothing else like it on the market.