The Lenovo Legion 5 Pro makes a lot of things seem easy. At its core, it’s a gaming laptop that plays games very well. But it also has a wonderfully expansive 16-inch QHD (technically WQXGA, since it’s 2560 x 1600) resolution display that’s great for gaming and other use cases. Notably, this is a 16:10 aspect ratio screen, and my eyeballs appreciate the luxury of having more stuff to look at without needing to scroll or resize windows to fit within view. Lenovo’s combo of a taller, high-resolution screen is what you’ll want in your next gaming laptop, even if you don’t know it yet.

This laptop is full of other delights, like its TrueStrike keyboard. It’s a stuffed layout, with a numpad, a full row of function keys, and dedicated media keys, yet it’s comfortable to use and thoughtfully arranged. It doesn’t come at the expense of a sizable, responsive trackpad, either. For any kind of media, the Legion 5 Pro also has better-than-average speakers that are actually pleasant to listen to, as opposed to most gaming laptop speakers that make me writhe in anguish.

There are a handful of recent gaming laptops that have the Legion 5 Pro beat with a thinner build — not that I’d call Lenovo’s 16-inch model thick, per se. Still, it wears its larger size well with a slick design that doesn’t forget to include a good amount of ports. Also, this laptop allows for user-upgradeable RAM and storage (it has two RAM slots and two M.2 slots), which is a perk that thinner gaming laptops usually can’t achieve due to space constraints. 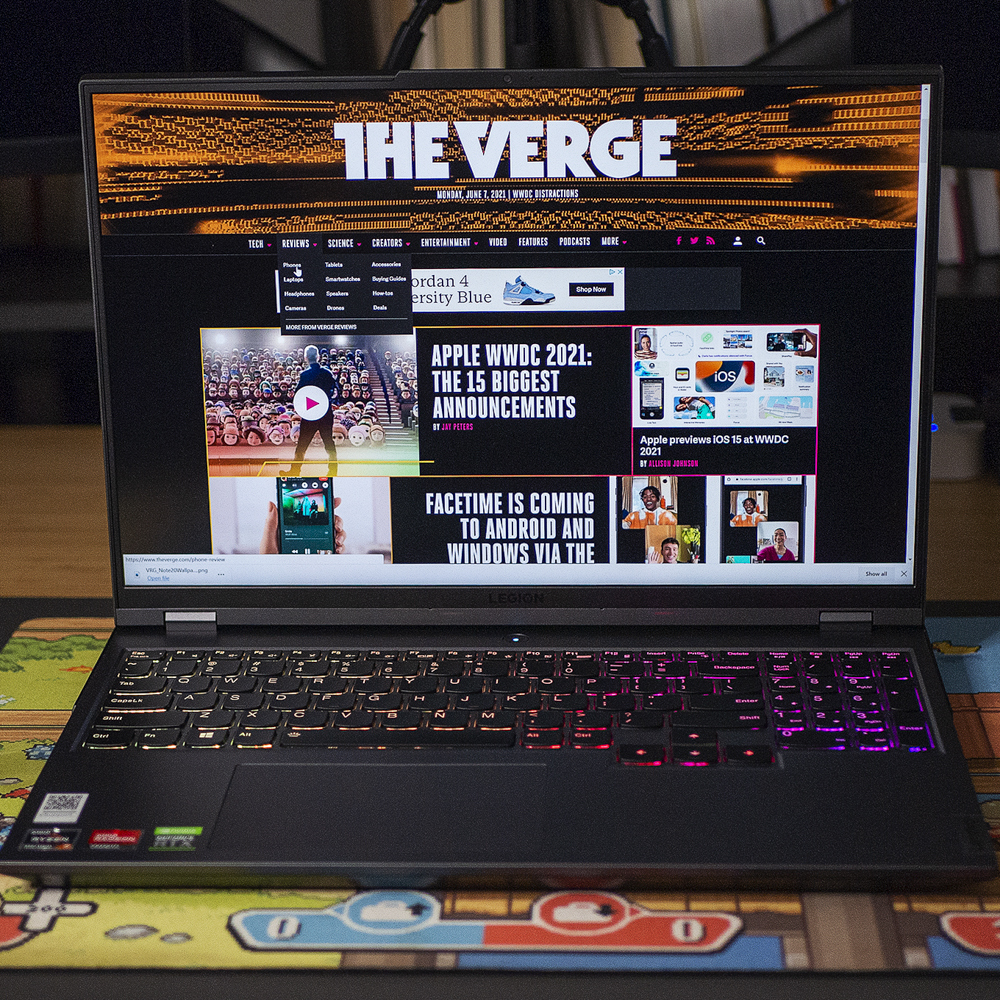 Every laptop has compromises, but the few that Lenovo’s Legion 5 Pro has aren’t as apparent as they are in some other models. I’m willing to overlook its average battery life and paltry 512GB of storage, as it’s priced very competitively at $1,529.99.

The Legion 5 Pro is a looker, at least compared to other gaming laptops. This laptop has air exhausts at its rear and on its sides, and it doesn’t get too warm.

The configuration that’ll be available at Walmart in late June features 16GB of RAM and 512GB of NVMe storage — both of which are user-upgradeable (though half a terabyte fills up awfully fast these days). AMD’s octa-core Ryzen 7 5800H processor is powering the show, along with a capable variant of Nvidia’s RTX 3070 with 140W of maximum graphics power and a 1,560MHz boost clock speed. Paired with its higher-res display, this hardware can provide respectable frame rates across the board, even in titles that feature demanding ray tracing settings.

Getting right into the performance, I ran a few demanding games at its native 2560 x 1600 resolution with the highest possible graphics settings. Red Dead Redemption 2 ran at an average of 59 frames per second; Horizon: Zero Dawn hit 73 frames per second. Both are respectable results, especially given that this laptop is running them at higher than 1080p resolution.

Even games with ray-traced graphics fared well, including Shadow of the Tomb Raider and Control. With Tomb Raider’s ray-traced shadows and Nvidia’s DLSS feature turned on, it ran at an average of 63 frames per second (DLSS lowers the render resolution, then relies on an AI model to touch up the aliasing and textures to look nearly just as good as running a game at native resolution, without as much of a hit to performance). With Control, a game that has more ray tracing graphics options, the Legion 5 Pro maintained a steady 45 frames per second with all of the most demanding settings and DLSS on — an impressive feat. Turning down the ray tracing features to medium instead of high (with DLSS still on) boosts the average frame rate to around 60 frames per second. Without any ray tracing effects, the 5 Pro can run Control at the display’s native 1600p resolution at around 70 frames per second.

The display has thin bezels, but Lenovo didn’t forget to include a webcam. The Legion 5 Pro has a healthy amount of ports on its rear. There are more around the sides.

Some context is necessary to understand how those numbers stack up against our current favorite gaming laptop, the slightly more pricey Asus ROG Zephyrus G15, which has a 1440p QHD screen (slightly lower resolution than this one), a faster octa-core Ryzen 9 5900HS processor, and an RTX 3070 with a lower 100W power ceiling. The results come out in favor of the Legion 5 Pro, as it squeezed just a few more frames per second out of each game (Control wasn’t tested on the G15 during our review period), a testament to its higher-powered GPU being able to push impressive frame rates to an even higher-res 1600p resolution display. It’s all the more impressive that the 5 Pro doesn’t get too loud or hot during gameplay. It exhausts warm air out the left and right sides, as well as on the back. During the winter months, the flow of toasty air seems like a perk if you use a standalone mouse off to the side, but it might be annoying if you get warm easily.

I recently tested the Alienware M15 R5, which has the same Ryzen 7 5800H processor, but with an RTX 3060 with 125W of maximum graphics power. Like the Legion 5 Pro, this model has user-upgradeable RAM and storage. Though, the M15 R5’s $1,616 configuration comes with a 1080p display, so its GPU is under far less stress than the faster one in Lenovo’s. Given that this Lenovo Legion 5 Pro is priced at about $50 more — and is superior in several ways outside of performance — I’d just suggest you forget about Alienware’s model, as you’ll get less for your money there.

The Y-shaped logo illuminates white when the laptop is on, and it glistens when it’s off. Lenovo crammed so much into this keyboard layout, but it’s still easy to use.

The high frame rates are easier to appreciate here than on some other models because of Lenovo’s 165Hz refresh rate G-Sync display. Games feel responsive, and they look great. The panel specs say that it can reach 500 nits of brightness, and that it’s certified for color accuracy by X-Rite and Pantone. I didn’t have tools on hand to put those claims to the test, but the colors look accurate and the screen gets bright enough to make it possible to work outdoors or to sit next to a window that’s giving off some glare without squinting to see text or images. I didn’t need to turn the brightness up higher than halfway for most tasks, and that setting seems like the peak brightness of some gaming laptops that I’ve used before (the ROG Zephyrus G15 claims to reach 300 nits of brightness). Turning up the brightness while gaming made the experience appear more cinematic, like watching on a bright TV. Viewing angles are wide and generous, too, and it provides a serviceable image on lower brightness settings if you’re trying to conserve battery. Lastly, I appreciate how thin the bezels are surrounding the display — even the chin bezel at the bottom is barely there.

The 5 Pro has an 80Wh battery that lasts for about four and a half hours under normal productivity (not gaming) use, and that’s with all of the usual battery-saving measures taken. I dialed in the efficiency settings to “better battery” mode in Windows 10 and to “hybrid mode” in Lenovo’s preinstalled Vantage software to ensure the Legion 5 Pro isn’t relying solely on the RTX 3070. This result isn’t nearly as good as some other powerful gaming laptops we’ve tested that have one of AMD’s Zen 3 CPUs inside, like Alienware’s M15 R5 that provides about seven hours, the eight-plus hours we saw with the Asus ROG Zephyrus G15 (while powering a QHD screen), and over nine hours in the Asus ROG Strix G15 Advantage Edition.

Four and a half hours of battery life isn’t bad for a gaming laptop, considering two to three hours was both expected and excusable in 2019 and 2020 models. But the competition has raised the bar in this department in such a way that this weaker performance is one of the Legion 5 Pro’s more glaring issues. Its 300W power brick is also quite large. Lenovo earns some props, though, for supporting USB-C charging (up to 65W), and its Rapid Charge Pro feature that claims to quickly recharge the laptop up to 50 percent in 30 minutes (it actually recharged a staggering 80 percent from zero in less than 30 minutes). But still, if longevity is essential for you, this might knock the Legion 5 Pro off from being a top pick.

As I mentioned earlier, Lenovo’s TrueStrike keyboard is very good. It has four-zone programmable backlighting with 1.5mm travel per key and 100 percent anti-ghosting. It was effortless for me to adapt to the layout and feel both in and out of gameplay. Lenovo says it increased the size of its precision trackpad by 23 percent based on user feedback on previous Lenovo Legion gaming laptops. The Legion 5 Pro has a 720p webcam, which delivers passable image quality. Some of Asus’ gaming laptops that we recommend don’t feature a webcam, but in case that’s a deal-breaker feature, you might be glad to find one here. It has an electronic on / off switch on the right side of the chassis, as the bezel hosting the webcam is apparently too thin for Lenovo to fit in a physical cover over the lens.

Most of the ports are around back, but the left side hosts this USB-C port and a headphone combo jack. The electronic switch for the webcam and a USB Type-A port are on the right side of the Legion 5 Pro.

Trying to figure out which gaming laptop offers the most value can make your head spin. It’s easy to find powerful models, but it’s far less simple to find one that’s multifaceted to handle more than just games. The Legion 5 Pro doesn’t get everything right — namely battery life. But it’s the gaming laptop to beat right now when it comes to powerful specs, a big, high-res display, and a handful of other niceties, like decent sound quality, a good keyboard, and user-upgradeability. It earned a spot at the top alongside Asus’ ROG Zephyrus G15, with user-upgradability and power in place of Asus’ good battery life and lightweight design. Now, we’ll have to wait to see how Asus answers with its Intel-based ROG Zephyrus M16, a 16-inch gaming laptop with a similar 16:10 aspect ratio display.