I was skeptical of the ROG Strix G15 Advantage Edition when I first got my test unit from AMD. While the frame rates the Radeon RX 6800M delivered were respectable, it wasn’t decisively outperforming comparable systems with Intel and Nvidia parts. I assumed that this gaming laptop would be fairly middle of the road, without many standout features to set it apart from the pack.

Then Asus gave me the price.

Here, have a Strix.

Regardless, a Strix for $1,699.99 is a great value. This model is delivering better performance and better battery life than I’d expect to see from all kinds of gaming laptops that are hundreds of dollars more. Given the Strix’s flashy and decidedly enthusiast aesthetic, I think it makes a bit less sense as a value purchase than something like the Zephyrus G15. But, if you’re looking for a bold and garish gaming laptop that’s punching well above its price class, you’re probably in the target audience. 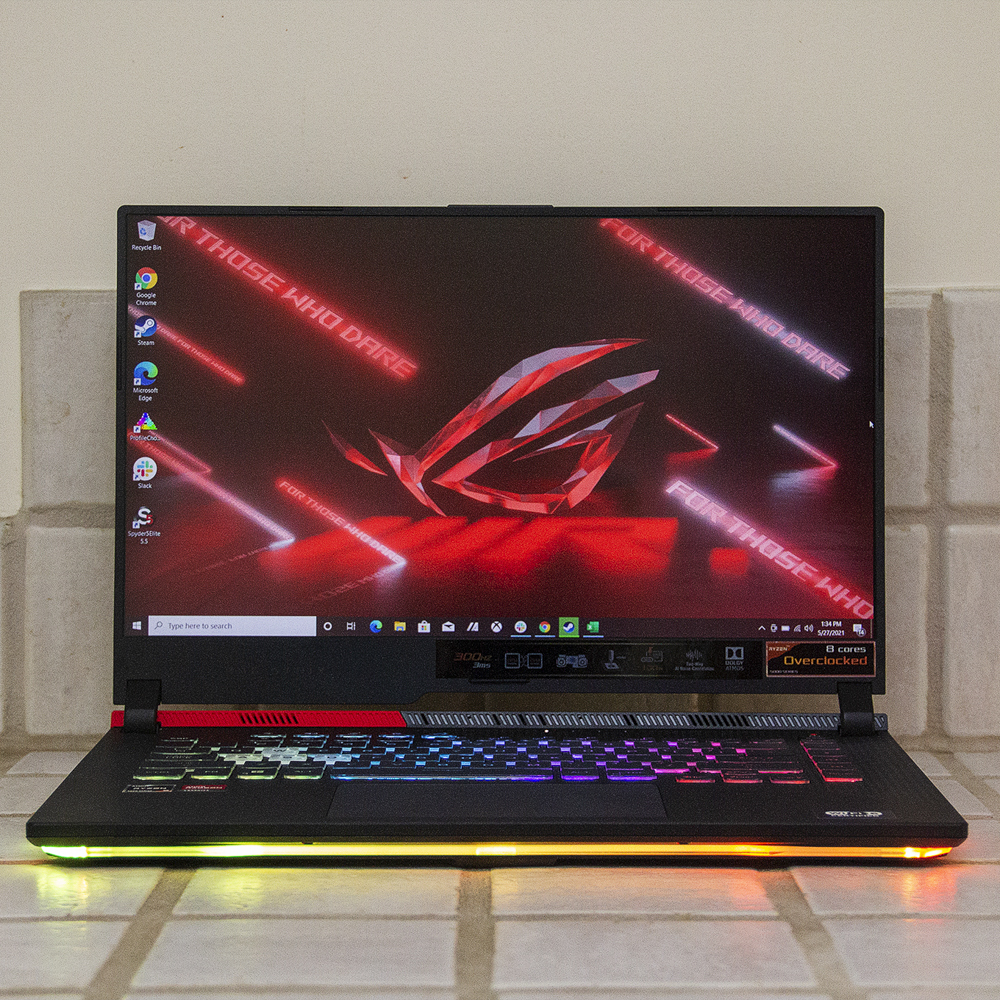 This Strix is one of the first laptops announced that includes AMD’s new RX 6000M series mobile GPUs, and the first one I’ve gotten to test. Given the price of the RTX 3070 model, it’s clear that’s the card Asus expects the 6800M to be trading blows with.

For some raw results: the Strix G15 averaged 252fps on CS:GO, running the benchmark full of dust storms and fire blasts with no stutter in sight. The system averaged 87fps on Horizon Zero Dawn, and 77fps on Red Dead Redemption 2. It put up 69fps on Shadow of the Tomb Raider with ray tracing on ultra, and 94fps with ray tracing off. (All games were run at native resolution at their highest possible settings). Basically, you should be able to run pretty much any game you want at playable frame rates.

From the results here, it seems that the RX 6800M is performing slightly worse than (but comparably to) a high-clocked RTX 3070 but is outperforming expectations for a low-clocked RTX 3070 on most titles. It’s an upgrade from last year’s Nvidia chips, beating Asus’ 2020 ROG Strix Scar 15 with an RTX 2070 Super on every game. We haven’t yet gotten to review the 3080 model of the Scar, but the frame rates other reviews have reported are better than, but not worlds away from what I’m seeing here — and the Scar is almost $1,000 more. It’s also not too far off the what we’d expect from the Zephyrus G15 with a 100W RTX 3080 on some titles (and even better on some), so given that Asus has the 3080 Zephyrus listed at $1,999 and the RTX 3070 model listed at $1,849.99 (though both models have a QHD screen instead of a 300Hz 1080p one and more storage) the Strix is a better deal going by performance alone.

Games also looked great on the 300Hz FHD display. Asus says there will be an option for a 165Hz QHD display as well; both have a 3ms response time. While I haven’t gotten to test that model yet, the panel on my configuration is less color accurate and dimmer than the QHD screen on the Zephyrus G15, maxing out at 291 nits in my testing and covering 100 percent of the sRGB color gamut, 76 percent of the Adobe RGB gamut, and 78 percent of the DCI-P3 gamut. So if you prefer that colors pop or you plan on gaming outside, you’ll probably want the QHD display. My configuration is better for folks who want every last frame they can get — on a title like CS:GO, you’ll see more frames on the 300Hz screen than you would on the 165Hz one.

On the left: two USB-A, one audio jack. On the back: one power port, one Ethernet jack, one HDMI, one USB-C, one USB-A.

Some of this performance can be attributed to Asus’ cooling, which did a decent job here. The Strix G15 has a vapor-chamber cooling system with new 84-blade “Arc Flow” fans that are supposed to increase airflow from previous Strix generations by 5 percent. The system works: it generally kept the CPU below 80 degrees Celsius with spikes up to the high 80s here and there. Temperatures on the keyboard and palm rests remained comfortable as well.

Temperatures on the keyboard and palm rests remained comfortable

There are a few different cooling profiles, and fans were quite audible on the Turbo profile during both gaming and productivity work. If you’re really feeling adventurous, you can set a manual profile with all power limits and fan speeds maxed out, and then you’ll hear fan noise like you’ve never heard before. (Admittedly, this didn’t do much to improve frame rates, but it was fun to try.) I never heard any fans on the Silent profile, even when I put my ear to the deck. The bottom of the chassis did get a bit toasty on my lap on Silent, though it was tolerable.

The G15’s speakers are also plenty loud enough that you shouldn’t have a problem hearing your game’s audio over the fans. Bass and percussion were quite audible, which I rarely get to say about gaming laptop speakers. The Strix also comes preloaded with Dolby Access software, where you can swap between profiles for games, movies, music, and voice. The Music profile brings vocals to the forefront, but I actually preferred the Game and Movie profiles for my Spotify repertoire because they made the bass stronger.

The speakers and microphone support two-way AI noise cancellation. You can turn this feature on and off, and fiddle around with its intensity in Asus’ Armoury Crate software. The microphones had no trouble picking up my voice with and without the feature on, of course. That said, the Strix G15 wouldn’t be a great choice if you’ll be doing a lot of video calling because — as is often the case with many ROG products these days — it doesn’t have a webcam.

But where the Strix G15 really makes its case is the battery gaming experience. I only got an hour of gaming out of one charge, which is a fairly short life span. However, the Strix ran Red Dead Redemption 2 at playable rates for the entire time, maintaining between 30fps and 40fps for almost the entire hour, dropping to the high 20s around 12 percent, and remaining there until it died. I’d recommend this laptop to people who want to games on battery over others with more juice due to the large amount of actually playable time you get.

Battery life on the whole was very solid. I was averaging about two and a half hours on last year’s Strix Scar 15, and while I expected this AMD machine to last longer, I was shocked by how much more juice it had. Using the Strix G15 as my daily work driver on the Silent profile around 200 nits of brightness, I averaged nine hours and 16 minutes of continuous work and entertainment. That makes it one of the longest-lasting gaming laptops I’ve ever tested. It beats what I averaged on the Zephyrus G15 with the same workload — and I’ve been singing that device’s praises all year for its efficiency. It’s especially impressive because the Strix G15 is powering a ton of RGB LEDs (though it also has a lower-resolution screen).

The 280W adapter also juices the Strix G15 decently fast; the device reached 60 percent in 38 minutes alongside light Chrome use. The brick is pretty hefty, but the Strix also supports 100W Type-C charging.

You can 3D print your own hinge caps.

Elsewhere, the chassis has the bold and flashy look that characterizes the Strix line. An RGB light bar runs under the front edge of the deck, and the keyboard has per-key RGB lighting. My unit came with a bright red plate on the left side of the otherwise black hinge, which you can swap out for faceplates of other colors if red isn’t your speed. It won’t be the aesthetic for everyone, but it’s certainly a look.

RGB aside, the chassis feels well made and quite sturdy. The lid is aluminum, and the palm rests have a smooth, comfortable texture with an unobtrusive pattern including the letters R, O, and G.

It won’t be the aesthetic for everyone, but it’s certainly a look

Port selection is okay but could be better. There’s one USB-C 3.2 Gen 2 Type-C port (not Thunderbolt, since this is an AMD machine), an HDMI port (2.0b, rather than 2.1), three USB 3.2 Gen 1 Type-A ports, an RJ45 LAN port, and a 3.5mm combination audio jack. The right side is port-less, but a number of ports are on the rear (including the power jack).

ROG keyboards are some of my favorite ones you can get, and this one is no exception — it’s comfortable with quite a bit of travel. There are useful dedicated keys for volume, cutting the mic, swapping between fan profiles, and pulling up Armoury Crate. The W, A, S, and D keys are a translucent white (in contrast to the rest of the caps, which are black) allowing you to see the switches beneath. I imagine this will be a controversial choice, though I personally like the look. The spacebar on my unit very occasionally squeaked, but that’s my only complaint.

The glass touchpad is smooth and roomy — it’s 85 percent larger than previous Strix touchpads, per Asus. I had no issues with palm rejection (which was a relief, considering that my right palm was often resting on the edge). It sometimes thought I was zooming when I meant to scroll, but I’ll take that over a jumpy cursor.

Asus says the chassis is 7 percent smaller than previous generations.

All together, the Strix G15 Advantage Edition is an attractive package. There are nitpicks, sure. But at the price range Asus is providing, it’s hard to see any of them as dealbreakers.

The question is whether you’re in the target demographic. For example, if you like the Strix’s flashy lights but want the absolute best performance you can get, you might be better suited paying more for the Strix Scar 15. If you’re looking for an RGB look that’s more subtle and refined, with a more practical port selection, you may find Alienware’s M15 R4 more appealing. And if you want an excellent AMD system with all-day battery life, but don’t quite need this much power, you’ll be able to get all kinds of options, like Lenovo’s Legion 5 or Asus’ Zephyrus G14, at lower prices.

But if you’re specifically looking for this kind of bold design, in an all-AMD system, at a sub-$2,000 price point, and are willing to give up a webcam and some modern ports, the Strix G15 Advantage Edition is probably the best you can do. Go much cheaper and you’re getting into territory where you’ll see significant compromises on performance. The Strix is more of a niche purchase than the lighter and subtler Zephyrus, but plenty of good laptops are. If it’s your thing, go for it.