The new Alienware M15 R5 Ryzen Edition is a slight undoing of progress, depending on how you look at it. As many gaming laptops are going thinner, this one is heavier and thicker than previous generations. Its design has been tweaked slightly in ways both good and bad, and it has fewer ports than before, too.

Despite all of that, it’s a cause for a small celebration because of the Ryzen processor it uses, marking AMD’s return to Alienware products after a 14-year gap when the brand exclusively used Intel CPUs. And it’s a welcome return, even if this laptop won’t appeal to everyone. AMD’s high-end mobile processors have been a boon to gaming laptops for the last couple of years, bringing long battery life and fast performance that sometimes outpaces and undercuts laptops that have competing Intel processors.

The Ryzen 7 5800H processor brings that magic to the M15 R5 Ryzen Edition, and gaming performance with its RTX 3060 doesn’t struggle to get above 60 FPS in graphically-demanding games — all thanks to being a high-wattage component. This R5 that I tested has 16GB of RAM and a 512GB NVMe SSD for a total cost of about $1,616 currently, which isn’t cheap despite being close to the most affordable version that Alienware makes. If money isn’t an issue, it can be upgraded to the more powerful Ryzen 9 5900HX with Nvidia’s RTX 3070 and more storage and RAM for $2,379. 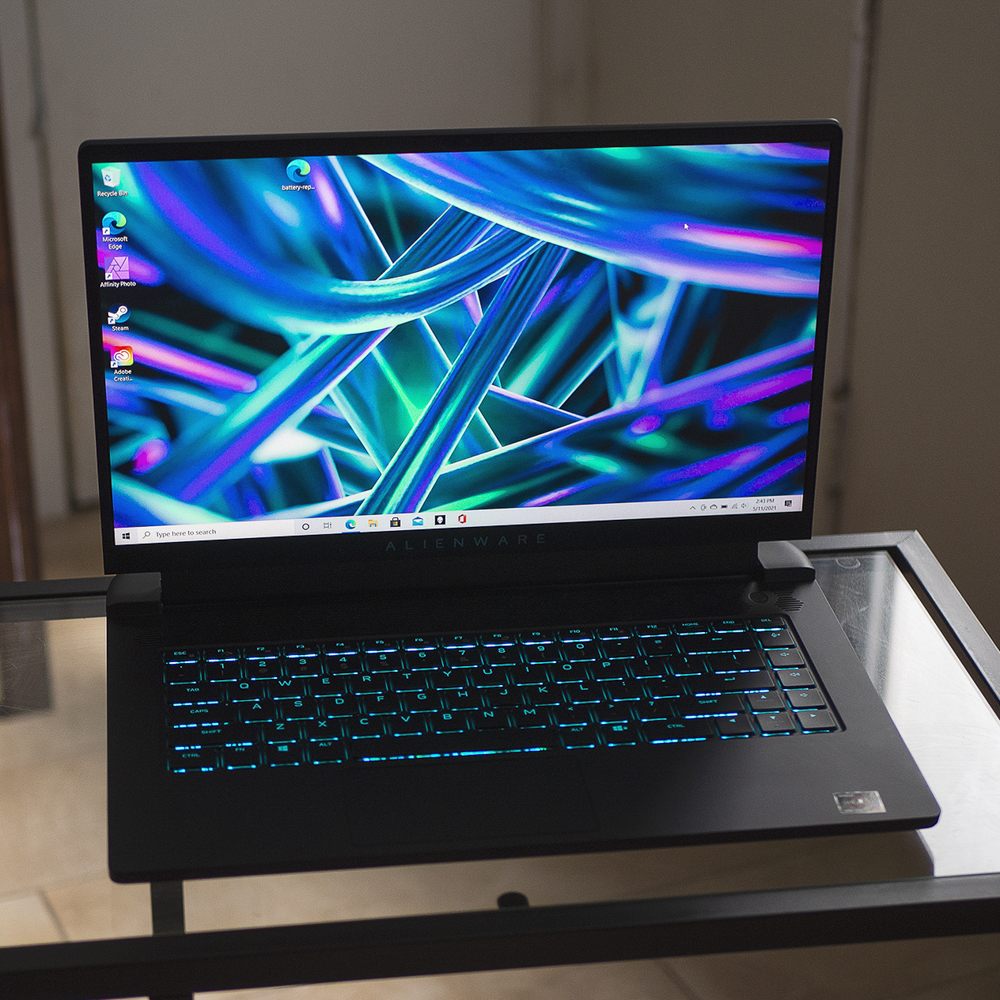 The high price is something that I couldn’t ignore while reviewing this laptop, especially since Dell (Alienware’s parent company) makes a $1,225 G15 Ryzen Edition that has similar GPU specs that should come close to what this pricier M15 R5 can do. And, if you can settle for a slightly lesser processor, there’s a $900 model in the works that has the RTX 3060, but it isn’t available yet.

Alienware ditched the glossy bezels for an all-matte look that I prefer. This model comes in a single colorway. It’s a dark gunmetal grey.

The value doesn’t fare well outside of Dell’s world either. Asus is currently the go-to brand for excellent AMD-based gaming laptops that are easier to recommend for people who want something more portable and feature-packed, without sacrificing battery life. Compared to a similar M15 R5 configuration, the ROG Zephyrus G15 offers a QHD display, more storage, a better processor and a powerful RTX 3070 (albeit a lower-powered GPU than you’ll find in the M15 R5) for a few hundred dollars less. The new Strix G15 Advantage Edition looks more garish next to Alienware’s laptop, but it also has fast gaming performance and high-end features for a lower price. Neither of these models feature a webcam, but that might be something you can live without.

The M15 R5 is 19.25mm (0.75 inches) thick for most of the machine (thinner at the front, but slightly thicker in the back) and it weighs 5.34 pounds. Some configurations weigh more, going up to 5.93 pounds. Its heft is jarring if you’ve picked up an ultrabook recently, but it’s an asset in helping its high-wattage RTX 3060 graphics chip (125W maximum graphics power, 1,702MHz boost clock) to perform similarly to a low-wattage RTX 3070. Compared to thinner laptops that have a low-powered 3070, like Asus’ TUF Dash 15, Alienware’s laptop makes up for the difference in CUDA cores with sheer power. It will likely be a solid performer well into the future — perhaps longer than some lower-powered 3070s — despite having a technically lesser component. It’ll just be more of a chore to lug around.

The M15 R5 Ryzen Edition fared well while running some demanding games at their highest settings. Red Dead Redemption 2 managed to reach 63 frames per second. Shadow of the Tomb Raider ran at about 80 frames per second with its ray tracing shadows feature and DLSS switched on. Horizon Zero Dawn ran at an average of 68 frames per second. None of them came close to fully taking advantage of the default 1080p display’s 165Hz refresh rate, but most people likely have older games in their library that should be able to display at very fast frame rates on this laptop.

The best parts of Alienware’s styling have been preserved from previous generations. Though, the keyboard layout has gotten a little more cramped with this generation.

It didn’t take long for this laptop to make a good impression with gaming performance. It took even less time to learn that it gets warm to the touch even while idling with no apps, and that when games (especially graphically-demanding ones) are running, it can get very loud. A fast and quiet gaming laptop is an oxymoron, and the M15 R5 is really just one of many offenders. But I didn’t notice signs of thermal throttling after long periods of gaming, nor did I encounter unexplainable slow-down. You just might want to wear some headphones while gaming. The speakers shoot sound out of the sides of the laptop. It’s serviceable for YouTube videos or video calls, but it doesn’t deliver enough depth or bass for entertainment purposes.

This Ryzen-based gaming laptop can handle any sort of casual browser-based workflow with ease. It shouldn’t have surprised me that the M15 R5 has great battery life, since AMD’s processors have proven to bring efficiency to other gaming laptops, but it still did. This one’s 86Wh battery lasted for about seven hours of mixed use, through sustained use of Microsoft Edge with 10 or so tabs, Spotify, Slack, and some video calls. That’s great for an Alienware laptop. The M15 R3 that I reviewed last year clocked in at just one hour. Though, other AMD-based gaming laptops have the M15 R5 beat. The Strix G15 Advantage Edition lasted over nine hours for my colleague Monica Chin.

One area where the Ryzen Edition got a little hung up is with a video export test in Adobe Premiere Pro. Our video team’s five-minute, thirty-three second 4K file took just over seven minutes to finish exporting. That’s not a bad result, but it’s not going to be fast enough for creators to quickly turn around projects and not nearly as fast as laptops with Intel processors can manage.

The display has generous viewing angles and a satisfying amount of contrast. Unlike some gaming laptops, this one has a webcam (though it’s not great).

The M15 R5’s design is different from earlier models in minor ways. Sometimes, it’s for the better. For instance, this newer model is matte-textured all around, including on its screen bezels, which looks better than the glossy bezels used in previous generations. Some people might like the M15 R3 and R4’s two-toned color design, but the R5 comes in a gunmetal silver color that is striking, and the black plastic covering the keyboard is relatively free of distractions, aside from the backlit keyboard and illuminated Alienware logo. One of my favorite changes is inside of the laptop: Alienware lets you easily upgrade the RAM and storage if you want. Some previous models had RAM soldered onto the motherboard, but this one’s more futureproof.

Alienware shuffled around the keyboard layout, though, and it’s worse off than before. The M15 R5’s keys are still enjoyable to type on, but I make more typing mistakes because the volume keys have been delegated to the right side of the keyboard instead of the top. Also, the arrow keys were previously positioned a little lower than the rest of the keyboard to make them easy to find, but those have been shoved up in this model, resulting in a smaller right shift key. This might not be a problem once you get accustomed to typing on the M15, but it still feels like a step backwards.

Missing from this model, and all other new models that Alienware recently unveiled, is the proprietary amplifier connector for its external GPU enclosure, which has been officially discontinued. Intel-based versions of Alienware’s newest laptops, like the M15 R6, X15, and X17, will support Thunderbolt eGPUs, but the M15 R5 won’t because it lacks a Thunderbolt port. So, you’re just stuck with the GPU that’s inside. Thankfully, the graphics performance is great by default, but there’s a lot of unused space on the R5’s rear where that amplifier port used to be. It would have been nice if Alienware had filled it with an SD card reader and an extra USB-C port.

Alienware should have put more ports where its GPU amplifier port (RIP) used to be located. This Alienware logo is just one of a few elements that glows when the laptop is powered on.

The M15 R5’s performance didn’t come into question during my testing. I don’t think I’ll ever tire of seeing the great battery life AMD’s processors bring, and it’s great that this GPU can hold its own next to pricier components like the RTX 3070.

But as a whole, Alienware missed the landing when it comes to value. If you want more features for your money, even if it involves swapping some of the M15 R5’s power for a QHD screen and better portability, you should look elsewhere. The M15 R5 isn’t the jaw-dropping value that it needed to be (and that I’d hoped it would be) to steer everyone away from the 2021 gaming laptop frontrunner (so far), the Asus ROG Zephyrus G15.